Get to Know Havana, Cuba 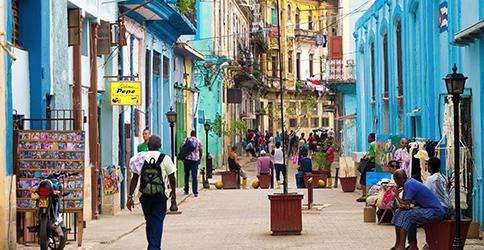 We’ve seen a lot of places on our journeys through the world, but there aren’t many cities more colorful than Havana, Cuba. Not only is it the capital city of Cuba, it’s also the largest city and the country’s leading commercial center. Keep reading to learn more about this fascinating place and its vibrant people!

2.1 million people reside within the city limits of Havana, making it the third largest metropolitan city in the Caribbean. It’s essentially three cities in one: Old Havana, Vedado, and the modern suburbs. As the seat of the Cuban government, Havana is home to over 90 diplomatic offices and various ministries, as well as many office headquarters.

Over a million tourists visit Havana each year, many of them visiting the historic city center, which was declared a UNESCO World Heritage Site in 1982. More recently, in May 2015, Havana received official recognition as one of the New7Wonders Cities, alongside Kuala Lumpur, Beirut, and others.

Most of the city’s population is of Spanish descent, but there is also a large population of Mestizo or Mulatto ancestry, and smaller black and Asian sectors.

Havana offers many culturally interesting sites, most notably the largest fortress in the Americas from the 16th-18th centuries. The government places special emphasis on enjoying cultural activities, so many of them are free, or cost only a small fee.

The city is a wealth of resources when it comes to the visual arts, and is home to a multitude of museums, performing arts centers, and festivals. It could easily be said that the city itself is a work of art, showcasing 500 years of architecture and design in one place.

If you’re familiar with this part of the world at all, it probably won’t surprise you that most residents of Havana are Roman Catholic. The city used to have a significant Jewish population, but the majority have left. Once, the city had five synagogues; now, it only has three. There are only about 1,500 Jews living in Havana, Cuba, at this point – a stark contrast to the original 15,000.

What Will We Do in Havana, Cuba?

During our time in Havana, we will see how the Lord is using Cuban believers to advance the Gospel. We will also be preaching and teaching the Word, worshiping and communing with new believers, baptizing, and praying over our brothers and sisters.

If you are interested in joining us, please know that time is extremely short to join our team. Contact us immediately if this is something you want to be a part of. And if you can’t go with us, you can always support our work in other ways!