God as Our Father 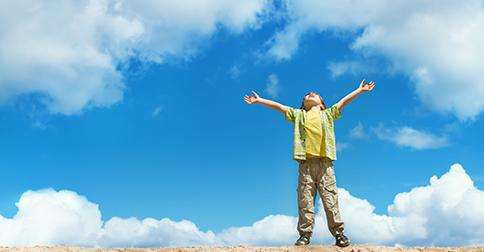 For many people, Father’s Day can be a tough day to get through. Whether they grew up with an abusive father, an absent father, or no father at all, the thought of celebrating the fathers of the world may seem too painful to acknowledge.

If you feel this way about your earthly father, what does that do to your image of God as our Father? Do you feel afraid of Him? Angry at Him? Are you waiting for Him to scold or punish you for doing something wrong?

Let’s take a look at what it means when we refer to God as our father.

The History of God as Our Father

Before we can understand what it means to refer to God in this way, we need to understand how this term existed in Jewish culture.

The short answer: it didn’t.

Not until Jesus came on the scene, anyway. In fact, in the history of Judaism — meaning, in the entire Old Testament and all existing Jewish writings starting from the beginning of Judaism until the 10th century A.D. — you will not find a single instance of a Jewish person calling God “Father.”

Jewish people used other “appropriate” ways to address God in the Old Testament, and their children were brought up learning to use proper, respectful phrases when addressing God. But “Father” wasn’t one of them.

It may not surprise you to hear that Jesus was the first Jewish rabbi to address God as “Father.” After all, Jesus had a way of doing things differently. But this was a drastic deviation from tradition — one that caught a lot of people completely off guard.

In almost every one of Jesus’s recorded prayers, he calls God “Father.” This was one reason many of Jesus’s enemies sought to destroy Him. It wasn’t appropriate (in their eyes) for Him to assume such an intimate relationship with God. But then He started telling people they could have the same relationship, and that’s when everything changed with the way people addressed God.

“When you pray, you say, ‘Our Father,'” Jesus said to the people. He was giving them — and us — the right to approach the Creator of the universe and call him Father. This is because He is, indeed, our Father who has adopted us as sons and daughters into His family and made us co-heirs with Christ.

So What Kind of Father Is He?

God is our loving Father who gave up His only son to save us, to include us in His family. He isn’t waiting around to punish us for our wrongdoings; He already poured out all His wrath on the crucified Jesus. And He isn’t judging us for our sins; He already judged Jesus for all the sins of the world.

He wants a relationship with us in the most loving, nurturing way possible. He wants the perfect father-child connection. He wants us to trust Him, to run to Him when we are hurting, and to lean on His strength instead of our own.

This Father’s Day, if you’re struggling with painful thoughts of your earthly father, try shifting your focus to the Father who will never let you down. He wants to love you, and He wants to take care of you. Can you let Him in?