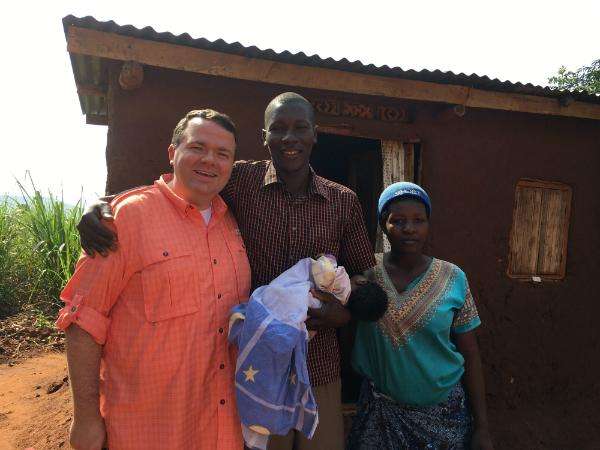 Thank you for your prayers and material support during our trip to Uganda.  Our team saw and experienced the love and power of Christ to save and to restore the lost and broken.  Among the many amazing people we met there was a church planter named Julius.  He and his wife and their new baby are pictured alongside Josh Clarke, Vice President of Development, above.  In a separate blog we will tell you more about this trip and what the Lord did.

Our brother Nathan Venton has relayed a story from a 63-year-old woman named San Du, who lives in China, about five miles from the border with Burma, where her family lives.  San Du described herself as being possessed by an evil spirit like the demoniac in Mark 5.  She went around with drool coming from her mouth, yelling at people, and unable to walk well.  People thought she was crazy.  Some Akha Christians in China shared the gospel with her in November 2015, and she became a follower of Christ.  Within two months, she reported being physically healed as well.  In January 2017, San Du visited her home village, where people were amazed that she was the same person they previously thought was crazy.  She shared the gospel with them, but none accepted Christ at first.  Then in May 2017, a Burmese missionary visited the same village and again shared the gospel.  After hearing the message again and seeing the changes in San Du, many were now ready to believe.  Nathan reports that 11 families have begun following Christ.  Praise the Lord for these miraculous events and pray for all these new believers.

One of our partners has reported to us that during May, 126 Afghans began following Christ and were baptized.  That is the highest, one-month total of baptisms of new believers that we have seen there.

In the past, we have not received reports of rapid growth in Turkmenistan.  Recently, however, we have received very encouraging news from two of our brothers, Malik and Imran.  They are helping to disciple 32 underground groups of 300 baptized followers of Christ.  Please pray for these leaders and disciples, who face potential persecution every day.

Despite much persecution as reported previously, the Lord of course continues to draw people into His Kingdom.  We have received an encouraging report from our brother Lazara Majhi in Odisha, India.  He and his wife have discipled leaders in the village of Birukuti, a place being transformed due to the light of Christ.  Lazara and his wife are working in other villages in the area to make new disciples of the Lord.

Our brother Kenny Fong has reported that four new believers will soon be baptized in the southern part of this island nation to the east of Madagascar, off the southeast coast of Africa.  Another new believer, Maggie, reportedly was beaten by her husband after he learned of her conversion.  Please pray for Maggie and her entire family, as she is now fearful of sharing her faith after this incident.

Let us know if you wish to accompany us on our upcoming trip to Cuba on November 4–11.  Please pray for the spiritual preparations of everyone involved and for those who will hear the gospel.  Please also continue to pray for the logistics of the trip, including the travel and work in the country.