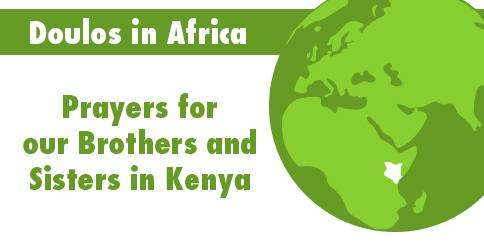 Through Reaching Souls International, Doulos Partners is currently involved in eight countries in Africa: Burundi, Malawi, Uganda, Tanzania, Kenya, Rwanda, Zambia and Zimbabwe. We are deeply upset with the news that has come out of Kenya over the past few weeks. We are concerned for our brothers and sisters living and working there. We ask for your prayers that they remain safe.

In early April, five shooters from a Muslim terrorist organization swept through a university in the Kenyan town of Garissa, shooting Christian students. They knew who to kill because they ordered students to recite an Islamic prayer. Those who could were spared. Those who could not were shot dead.

The murders of these Christians reveal the chaos spreading throughout these regions. The reality is that multiple jihadist Islam armies are engaged in a planned strategy to exterminate Christianity in the area.

Attacks have ranged from hurling hand grenades from a church pulpit towards the congregation to attacking Christians at barbershops, bus stops, football matches, shops, or even as they pass them on the road. Muslim terrorists have used every accessible method to kill Christians, from guns to incendiaries.

In fact, Open Door’s 2015 World Watch List of 50 most dangerous countries for Christians documents that Kenya, though 83% Christian, made the biggest leap on the list – from No. 43 to No. 19 in only a year.

All of Africa is suffering; African countries are seeing the largest increase in persecution. Along with Kenya, Mali and the Central African Republic saw the highest increases in persecution in the 2013 and 2014 reports.

This year, Djibouti, Tanzania, Somalia, and Comoros all climbed more than seven spots on the list. “Many other countries in this region are boiling below the top 50 also, and may feature in the future,” noted Open Doors.

The primary culprit in Africa and worldwide: “Islamic extremism,” which was the main reason for persecution in 40 of the 50 countries on the 2015 watch list.

In the case of Kenya, radical Muslims and militants crossing the border from Somalia are severely persecuting Christians. The government’s approach to pushing for an unbalanced secularist agenda also has an impact on the Kenyan church.

The Future of Kenya

With violence increasing, Kenyan Christians will continue to suffer as long as the underlying issues are not properly and adequately tackled. The future of the Kenyan church appears precarious. The government’s stance towards religious institutions is becoming less and less positive and the church faces intensifying levels of persecution, especially from the militant group al-Shabaab.

Things in Kenya will only improve if coalitions of the willing, from within and beyond this troubled region, will work to stop the elimination of Christians and other minorities in this country and the rest of Africa. ‘

We ask for your prayers for our brothers and sisters.

Please take a minute to learn more about our impact and learn how you can get involved today!