Stories from the Field: Tapan 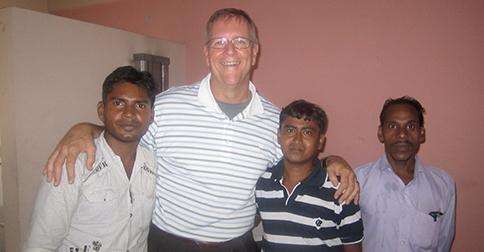 Since the inception of Doulos Partners in 2008, our Executive Director, David Johnson, has traveled to the field more than 40 times to see God at work among our church planters and partners. On these trips, he has not only witnessed the work, but has seen and heard the miraculous work of God through the lives of these people.

We have asked David to share some of these stories in a new series called “Stories from the Field.” These stories will not only offer insight into our partners, but will also give us a chance to bear witness to what God is doing around the globe.

In September 2011, I made my second trip to India as Executive Director of Doulos Partners. When I arrived, the Big Life regional leader of our work in Central and Southeast Asia, Benjamin Francis, asked me to teach Revelation 1-3 to a group of church planters in the area where we were working, West Bengal. The emphasis for this study was the 7 churches mentioned in the text. We were not to focus on the quantity of churches, but the quality of churches that were being planted.

After teaching about 50 church planters for 8 hours, a young man named Tapan approached me. He was a church planter who had attended my teaching and wanted to show his appreciation for my time with them. If you had seen Tapan, you would have suspected him to be a typical, unassuming, lifelong student. I looked at this young man, with his glasses on his nose and a set of pens in his shirt pocket, and I said, “Tell me your story.”

Tapan and his wife came from a traditional Hindu background. Their marriage was arranged, as many are in their culture. In 2006, he became very sick, and his family tried everything to heal him. The doctors came, but no medicine helped. The Hindu priests performed sacrifices by his bedside, but he only got worse. The village witch doctors danced around him as his health continued to deteriorate. Finally, the doctor told Tapan’s father to prepare the family for his death.

When one of the family members heard this, they went to his father and told them about a man who lives in the area who has prayed over people and seen them healed. In fear of his son’s impending death, Tapan’s father sent them to find this man.

The man came to Tapan’s bedside, praying for Jesus to heal his body. Tapan went to sleep, and when he woke up the next morning, he was completely healed.

After this experience, Tapan asked to see the man again. You see, it was one of our church planters with our partner, Big Life, that was summoned to Tapan’s bedside. The church planter came back to Tapan’s home and shared that it was not him, but Jesus, who had brought healing.

Through their conversations, Tapan and his wife came to know the Lord Jesus as their Savior. They immediately began to tell everyone about the one who had saved Tapan—Jesus. Tapan had no training, no Bible, and no church background, but he knew that he had to tell what Jesus had done in his life.

Tapan’s family began to persecute him and his wife, telling them that they must recant their profession of faith in Christ and return to Hinduism. Even as they continued to apply pressure, reject them, and persecute them, Tapan and his wife refused to recant.

Tapan became a church planter and went forward planting churches and preaching the Gospel. In 2008, he was out in the village preaching the Gospel when he received a call on his cell phone. (Yes—even in some of the most remote and impoverished areas in the world, they have access to cellular technology!) The person on the other end of the phone told Tapan that his wife was very sick and he needed to come home. Tapan got on his bike and rode back to his wife.

In describing this moment to me, he said, “Pastor David, I rode up my road and there was a huge crowd of people in front of my house.” As he arrived, the people started to split, Tapan said, “like the red sea for Moses and the people of Israel.” He rode his bike up to house and saw that his wife had been hanged from a tree in their front yard.

I will never forget his next words to me: “It was that moment where God said to me that I was not to have a spirit of anger, resentment, or retaliation. You are to extend mercy, grace and forgiveness to your wife’s killers.”

Soon, he would learn that his wife’s killers were his parents and his in-laws.

God continued to remind Tapan that while the culture says to retaliate, he should forgive just as he had been forgiven. And with God’s help, Tapan did just that. In the 3 years since his wife’s murder, Tapan had the opportunity to see 23 family members come to Christ—including his parents and in-laws, who had put his wife to death.

The President and CEO of our partner, Big Life, John Heerema, was at the baptism service where Tapan baptized his mother-in-law and father-in-law. They came out of the baptismal waters weeping over their sin and the power of Christ that had forgiven them for it.

Keep an Eye Out for More “Stories from the Field”

This story of the power of God at work through a humble servant is one of the many testimonies I have heard or seen on the field. If you would like to partner with a church planter like Tapan, or find out more about the work God is doing in and through Doulos Partners, please contact me at david.johnson@doulospartners.org.